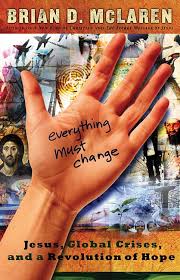 I have seemed to enjoy each one of Brian McLaren’s new books more than his last. It was, therefore, with great anticipation that I began to read his latest book: Everything Must Change: Jesus, Global Crises, and a Revolution of Hope.

McLaren seeks to address two preoccupying questions in Everything Must Change; What are the biggest problems in the world? And, What doe Jesus have to say about these global problems? These questions led to further questions like “Why hasn’t the Christian religion made a difference commensurate with its message, size, and resources? What would need to happen for followers of Jesus to become a greater force for good in relation to the world’s top problems? How could we make a positive difference (12)?”

Everything Must Change is carefully organized in order to address these questions. The book is organized into eight parts that each consist of around four very short chapters. The first four parts discuss McLaren’s “preoccupying questions,” the problem as he sees it and how Jesus relates to the questions and problems. The next three parts of the book discuss the three primary parts of what McLaren refers to as the “Societal Machine.” These parts are the Security System, the Prosperity System, and the Equity System. McLaren argues that the Societal Machine has gone suicidal. McLaren writes: “Eventually, you’d have to agree, the societal machine could grow to a size where it demanded more resources than the environment could provide and produce more wastes than the environment could absorb. At that point, the machine would go suicidal” (63). McLaren’s argument is that the Security System, Prosperity System, and Equity System are all dysfunctional and unless we find a way to reframe the story, the machine will go suicidal.

One of the major strengths of Everything Must Change is McLaren’s boldness in drawing attention to some of the ways that American culture is dysfunctional and ultimately self-defeating (or suicidal). Everything Must Change offers a needed critique of the culture of comfort and security that has proliferated without a critique from the American Church for far too long. While McLaren is certainly not the first person to offer such a critique, his growing popularity as the bearded grandfather of Emergent places him in a situation where he is able to speak to a larger and larger audience.

The ideas in this book are already put into practice in subtle ways. For example, the book itself is “green” as the dust jacket testifies that it is printed on “acid-free, environmentally friendly paper using approved green printing standards.” The copyright page further mentions that the paper is from “well-managed forests, controlled sources and recycled wood or fiber.”

My other thought, which I touched on in my review of Tony Jones’ The New Christians, is that Brian McLaren is famous! I have been amazed at the amount of publicity surrounding this book; book displays at Barnes and Noble that John Grisham would envy, a book tour, and I even got a random email asking me to pass out fliers before a book tour stop (that was actually nowhere near where I live). It seems to me that many people who have responded to McLaren’s message are fairly cynical of celebrities and people who seem to be larger than life. Brian McLaren is coming very close to becoming a celebrity, if he is not already one. I am interested to see how folks in Emergent respond to his increasing popularity, and what would seem to be a corresponding inaccessibility. Emergent seems to really be gaining a lot of momentum, and I will be watching to see what it does with it. Is this just the beginning, or is Emergent already peaking?

Ultimately, Brian McLaren raises some very important questions in Everything Must Change. I hope this book inspires the people who claim to be followers of Jesus Christ to examine more closely their allegiance to the kingdom of comfort and security in relationship to their allegiance to the kingdom of God. In as much as McLaren encourages followers of Jesus to bring hope into a world that is on the verge of going suicidal, this book is well worth the read and promises to stimulate much needed conversations about what it means to be a follower of Jesus Christ in the twenty-first century.

3 thoughts on “Everything Must Change – Brian D. McLaren”