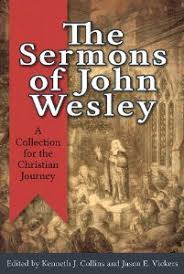 The Sermons of John Wesley: A Collection for the Christian Journey, edited by Kenneth J. Collins and Jason E. Vickers is now in print. I have been anticipating the arrival of this book since I was asked to write an endorsement of it last fall. Here is the full endorsement I originally wrote:

Collins and Vickers have provided a collection of John Wesley’s sermons that is a gift to both the church and the academy. The organization according to the Wesleyan way of salvation appropriately emphasizes Christian formation and the potential for the sermons to function as a means of grace. The decisions about which ones to include (especially including all of the standard forty-four sermons) provides important continuity with Wesley’s own decisions about which of his sermons were the most essential for the “people called Methodists.”

This volume provides an alternative to the standard one volume collection of Wesley’s sermons, John Wesley’s Sermons: An Anthology, edited by Albert C. Outler and Richard P. Heitzenrater. The Oulter and Heitzenrater volume is the one I read when I was in seminary and I expect that it will continue to be used in many seminary courses. John Wesley’s Sermons is an exceptional volume that uses the critical edition of Wesley’s sermons from the Bicentennial Edition of the Works of John Wesley and was edited by two heavy-weights of Wesleyan studies.

A reasonable question, then, would be: Why the need for a new collection of Wesley’s sermons?

Collins and Vickers anticipate this question in their introduction to the volume. The key contribution that the volume makes is that it contains all of the original forty-four sermons that were printed in the edition of Wesley’s Sermons on Several Occasions. These sermons were included in the “Model Deed” that stipulated that Methodist preachers must not preach or teach doctrine contrary to that which was contained in this collection. Collins and Vickers argue that “when Wesley drafted this disciplinary instrument, he obviously viewed these forty-four sermons, and not his entire sermon corpus, as being of remarkable and distinct value in the ongoing life of Methodism” (xiii). The Outler and Heitzenrater volume, on the other hand, omits nineteen of the forty-four sermons. A strength of this new collection, then, is that it contains all these sermons, which Wesley indicated were of particular value for the “people called Methodists,” in one volume.

The Collins and Vickers volume also contains eight of the nine sermons that Wesley added in 1771, omitting the sermon “On the Death of George Whitefield.”

This new volume has the advantage of presenting a (nearly) complete collection of the entirety of the sermons Wesley identified as having particular significance for early Methodism. It also includes an additional eight sermons that the editors felt were particularly helpful in “pass[ing] on the legacy of the Methodist tradition in a practical and relevant way to the current generation” (xix).

As indicated in my endorsement of the book, I think the most important contribution of this volume is that it is organized according to the Way of Salvation. The Outler and Heitzenrater volume was organized to focus on the development of Wesley’s thought over the course of his own life. This approach has significant value for seminars in Methodist history and doctrine. The main strength of the organization of the Collins and Vickers volume, on the other hand, is that it can readily function as a catechetical tool for helping form contemporary Wesleyans in their own theological tradition.

For more on The Sermons of John Wesley, including some insightful questions about the collection, see Fred Sanders’s interview with co-editor Jason Vickers at Patheos.

The Sermons of John Wesley: A Collection for the Christian Journey will be an important resource for helping to form the next generation of Wesleyans in the Christian faith.

2 thoughts on “New in Wesleyan Scholarship: The Sermons of John Wesley”