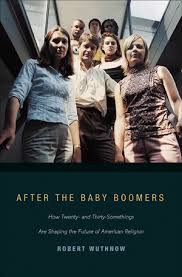 Today I finished reading Robert Wuthnow’s After the Baby Boomers: How Twenty- and Thirty- Somethings Are Shaping the Future of American Religion. After the Baby Boomers is an important study in the future of the American church. Wuthnow demonstrates that the church is only effectively reaching married young adults, which is significant because young adults are getting married later than they have in previous generations. Wuthnow argues that “unless religious leaders take younger adults more seriously, the future of American religion is in doubt” (17).

Wuthnow explores the role that twenty and thirty year olds will play in American religion from many different angles. Here are some things that particularly grabbed my attention:

These are just a few quick thoughts that I wanted to highlight. Wuthnow provides an incredible amount of material to ponder in this 297 page book. In the final chapter Wuthnow laments that “religious congregations have not done a better job of trying to figure out what young adults want and need” (216). Wuthnow’s conclusion is that “congregations can survive, but only if religious leaders roll up their sleeves and pay considerably more attention to young adults than they have been…. It would be surprising if, say in fifty years, congregations had simply disappeared. But survival and vitality are two different things” (230-231).

One final reflection that I had as I read this book: Wuthnow puts a lot of emphasis in his conclusion on the importance of religious leaders. What, if anything, does Wuthnow’s research suggest about the role that religious leaders who are in the demographic that Wuthnow is describing (i.e. 21-45 year olds) could/should play in helping to address the issues that young adults are facing? Is the church being a good steward of the young pastors that God has entrusted to it? What do you think?